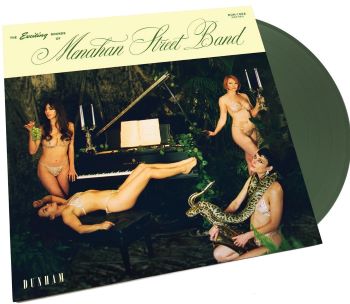 The MENAHAN STREET BAND are an eclectic lot to say the least! The loose collective was originally formed by Thomas Brenneck, the guitarist with the Dap-Kings and he named the band for the street in the Bushwick area of Brooklyn where he was living. Brenneck brought together plenty of his old musical pals to record a debut album, ‘Make The Road Walking’ in 2008. Since then, not a lot – as the various Menahans went back to work with their own groups – Budos Band, the Roots, the Dap-Kings, Lee Fields’ band The Expressions, and Charles Bradley’s backing band.

In the last several months Brenneck brought them all back together when their core outfits were in down time and from time to time, they cut new music. All that new music has been assembled, polished (if that’s the right word in the case of this band!) and is now almost good to go as an album, ‘The Exciting Sound Of The Menahan Street Band’…. released February 26th.

The LP has been heralded by the single ’Midnight Morning’ – a gentle, eccentric meander with the band’s usual striking brass sound. And there’s plenty more of that same sound throughout the 14 tracks that make up the full album.

It’s hard to cherry pick standouts; each track has its own merits – in their own quirky ways. Take ‘The Duke’ as an example. It features the signature brass sound but is led off by a bonkers organ sound that keeps cropping up throughout the track. ‘Glovebox Pistol’ offers a more mournful tone, conjuring up images of the “Man With No Name” riding into a dusty Western town while the wacky ‘Cabin Fever’ conjures up a crazy car chase vibe.

Across the whole 14 cuts there’s all kinds of everything… even down to the “arty” cover! Expect the unexpected (even the “exciting”) when ‘The Exciting Sound Of The Menahan Street Band’ hits the sales racks via Daptone/Dunham, February 26th.