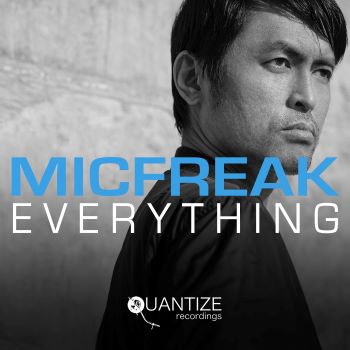 MICFREAK is the working moniker of Michael Cobaria. House heads will know all about him. He’s one of the Baltimore house dons and his debut album, 2019’s ‘Feelin’ It’, offered fresh perspectives on the genre. You see, unlike many DJs /producers, our Mike is a multi-instrumentalist – proficient on piano, guitar and drums and, obviously, that’s how he builds his productions. Playing everything himself (no…not a control freak!), he’s famed for his big beats, funky basslines and melodic synth fills. And that’s the soundscape right across his new collection – ‘Everything’ (remember, he plays “everything”?) which gets official release on his fellow Baltimore sparring partner, DJ Spen’s Quantize label on April 23rd.

‘Everything’ is a 15 tracker and the savvy house crew will recognize many of the cuts – notably  ‘Party People’ which feature Crystal Waters and has input from Spen himself and  the Cornel Carter vocalised ‘Keep Your Head To The Sky’ – still sounding hugely optimistic. Amongst the album’s other biggies are Barbara Tucker’s ‘Think About It’ and a “Zoom” re-edit of Shaun Escofferey’s ‘Days Like This’. Amongst the album’s other contributors/mixers are Abco, Masmin, DJ Strobe, Lee Buxton, Roland Clark, Thommy Davis and  Kid Enigma.

MicFreak’s ‘Everything’ is already out via Traxsource while the full release comes on April 23rd. All we can say is get your freak on!