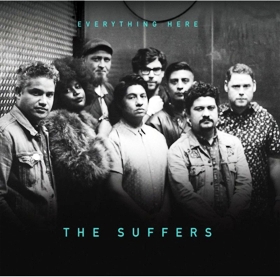 Back in March we were introduced to THE SUFFERS – an eight piece old school soul band – who describe themselves as “a contemporary version of the great R&B/funk bands of the 70s and 80s….Rufus, Earth, Wind & Fire, Kool & The Gang” and on the evidence of that introductory single – the good-time’ Do Whatever’ we couldn’t argue!

On the March release of ‘Do Whatever’ we were promised a full length album – and right on time – here it is – a wonderful, varied, soulful 15 tracker, ‘Everything Here’… and certainly in terms of proper soul music, that title is bob one; there is every shade of soul here…. up-tempo dancers, thoughtful introspection, searing ballads, hints of gospel – even a nod to the Caribbean – but more of that later.

The album opens with a tribute to the band’s home city – Houston – and the all-too short ‘Ode To Houston’ really works, setting the scene beautifully. The set’s closer is a burning, Southern soul ballad that builds into a gospel-esque climax; it’s a fine showcase for the diva talents of lead singer Kam Franklin. In between there are plenty more highlights – here’s a few- ‘Charlotte’ is a chirpy, ultra catchy earworm; ‘What You Said’ has a flavour of Steely Dan about it (save, of course, for the female lead voice); ‘After The Storm’ is a soulful ballad that draws its inspiration from the devastation caused to Houston by Hurricane Harvey (but “the storm” of course could also be an emotional one).

Then there are also some genuine oddities – like ‘Mamas’ – a tribute to all the band’s mothers. It’s prefaced by the mothers themselves taking to the mic to offer tributes to their sons and daughters…. sounds schmaltzy and over-sentimental, but it isn’t. The two items, sequenced as they are, are wonderfully inspirational – an ‘I’ll Always Love My Mama’ for the 21st century! If you want cheesy, though, try ‘Bernard’s Interlude’. This spoken word item features the bass voice of rapper Bun B and with a huge nod to Barry White and lines like “this is my interlude, to get into you”, I’m not quite sure if it’s serious or tongue in cheek!

There’s also a reggae-fied ‘Everything Here’. The title cut is a hint about the band’s name. “The Suffers” is a reference to the 1978 Jamaican film ‘Rockers’ that starred Leroy “Horsemouth” Wallace, Jacob Miller and Burning Spear… the band are big fans. And I guarantee that even a quick listen to this long player will make you big fans of the Suffers… honest.

The album’s out on Shanachie Records, July 13th.