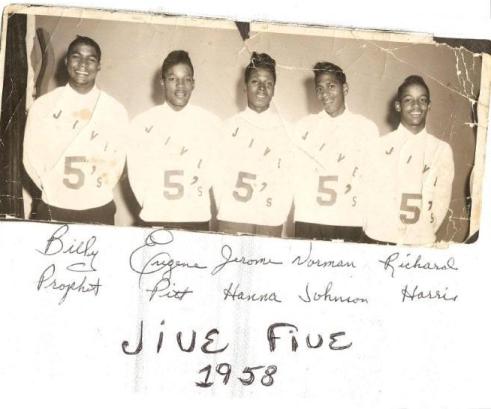 Eugene Pitt, leader of doo-wop and embryonic soul group, THE JIVE FIVE has died aged 80. It seems that an incarnation of the group is still active and their social media posted: “It is with a heavy heart that I announce, on behalf of the Pitt family, the passing early this morning (30 June) of the legendary lead singer of Eugene Pitt & The Jive Five, Mr. Eugene Pitt. Eugene had been ill for some time, but was in good spirits with love for his family, friends and fans. My heart breaks for his family and close friends. I ask for people to respect the family’s privacy at this time. Funeral arrangements will be announced at a later date. The best of the best has joined the heavenly choir. Rest In Peace, my friend. Godspeed and God Bless”

Born in Brooklyn, Eugene Sampson Pitt founded the Genies in 1954. Soon they became the Jive Five. Their biggest hit was ‘My True Story’ – a classic doo-wop ballad. Other successes included ‘What Time Is It,’ ‘Never Never,’ ‘These Golden Rings’ and ‘I’m a Happy Man.’ 60s soul fans will have fond memories of their lovely ‘Crying Like A Baby’ while the pacey ‘You’ll Fall In Love’ was a big Northern tune.

The group (with numerous personnel changes) lasted for almost 60 years and Pitt was an ever-present.