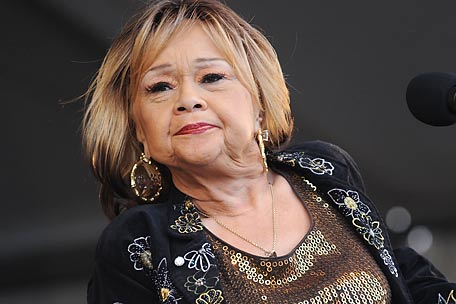 Press reports from the USA have confirmed that legendary soul vocalist ETTA JAMES is battling leukaemia. Covering the story, ASSOCIATED PRESS adds that her husband, ARTIS MILLS, is seeking to control ETTA’S finances as the 72-year-old singer is also suffering from dementia.

In the ’50s and ’60s, ETTA JAMES – working chiefly for the iconic Chess label – became one of the first soul superstars, though her work also encompassed jazz and blues. Her biggest hits included ‘All I Could Do Was Cry’ ,’Tell Mama’, ‘Something’s Got A Hold On Me’ and the luscious ‘At Last’.

Over the course of her career, Ms JAMES won four Grammys and was inducted into the Rock and Roll Hall of Fame in 1993. Sadly her career has had as many downs as ups and she’s never been shy of controversy, most notably – in recent years – when she publicly criticised BEYONCE’S version of “her” song ‘At Last’. ETTA JAMES has recorded 27 studio albums, issued an impressive 58 singles and her work has long been a mainstay of the Chess catalogue.