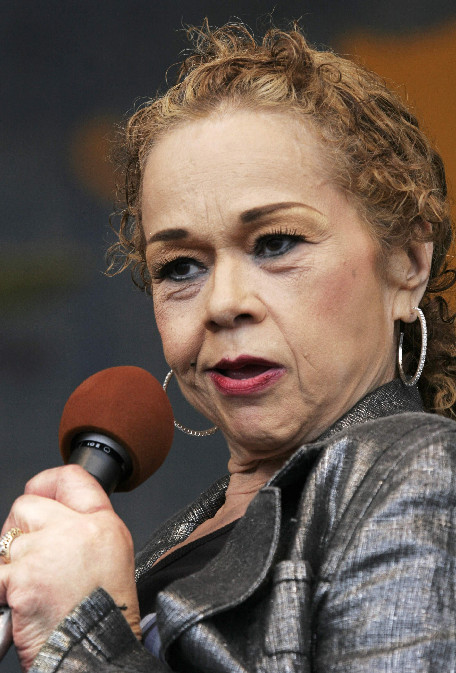 ETTA JAMES, “the matriarch of soul and blues”, has died in hospital in Riverside, California. The singer, born Jamesetta Hawkins, would have been 74 on January 25th. Over the past few years reports from the USA suggested that she had been in failing health for some time. Life, of course, had thrown untold problems her way but somehow she had always managed to survive. Sadly though ETTA gradually succumbed to dementia and was subsequently beset with other issues – most seriously hepatitis B and leukaemia. She died on Friday 20th January …. her husband ARTIS MILLS and two of her sons were at her bedside.

ETTA JAMES began singing professionally aged just 14 and in the ’50s and ’60s,working chiefly for the iconic Chess label, she became one of the first soul superstars, though her work also encompassed jazz and blues. Her biggest hits included ‘All I Could Do Was Cry’ ,’Tell Mama’, ‘Something’s Got A Hold On Me’ and the luscious ‘At Last’.

Over the course of her career, Ms JAMES won six Grammys and was inducted into the Rock and Roll Hall of Fame in 1993. Sadly her career had as many downs as ups and she was never shy of controversy, most notably – in recent years – when she publicly criticised BEYONCE’S version of “her” song ‘At Last’.

At the end of 2011 she released what was to be her final album and considering the state of her health at the time of recording, ‘Dreamer’ is a soul tour de force. Essentially a set of covers of old blues and soul songs, it harks right back to her golden days at Chess and by coincidence – to make that connection even easier – UK reissue label Ace/Kent have recently released two of her lesser known Chess LPs – ‘Call My Name’ and ‘Losers Weepers’. They and the numerous readily available greatest hits compilations are testament to the woman JERRY WEXLER described as “the greatest of all modern blues singers”.