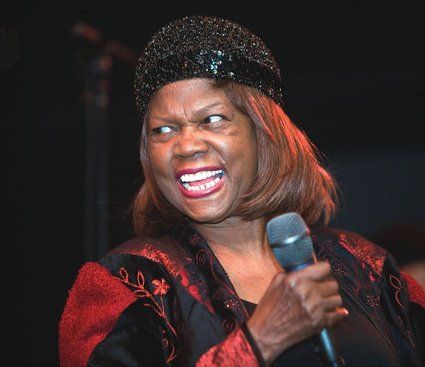 Born in Houston Texas in 1928, Ms Anderson’s first pro gig was with the Johnny Otis Band. She then worked with Lionel Hampton’s orchestra before relocating from Seattle to New York. Her first solo album, ‘Hot Cargo’, was released in 1958. It was recorded in Sweden and for long periods in the 50s and 60s Ernestine lived and worked in Europe.

In 1976 she signed with Concord Records for whom she recorded prolifically and through the late 70s and into the 80s she was a top draw on the US jazz circuit – selling out jazz clubs and headlining prestigious festivals.

In 1993 Ms Anderson signed with Quincy Jones’ Qwest label … ironically Jones had been a student at the same Seattle high school as Ernestine. At Qwest, she released two albums — 1993’s ‘Now and Then’ and 1996’s ‘Blues, Dues & Love News’ … both received GRAMMY nominations. At the end of the 90s she signed to Koch International.