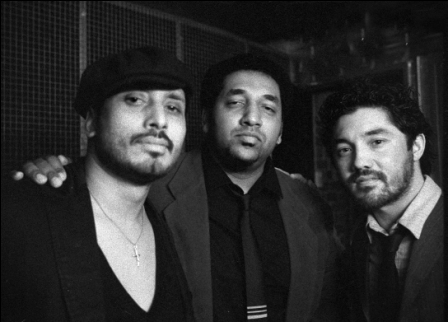 Discerning radio listeners and committed seekers of real modern soul will know by now that ‘Baby Your Lovin” by Australian band, ELECTRIC EMPIRE is building to be the big summer soul groove. Its gorgeous laid-back vibe has already won over taste makers like TREVOR NELSON and RALPH TEE and no wonder. Someone much better with words than this SJF scribe described the tune as “the best recording AL GREEN never made”… and you know, that’s bob on! The tune has an irresistible melody, a sweet vocal and a committed arrangement and production that good old WILLIE MITCHELL and the Hi crew would have been proud of.

The band – ELECTRIC EMPIRE – were formed in Melbourne in 2009 and right away the trio’s live shows were garnering rave reviews. The threesome – DENNIS DOWLUT (guitar), JASON HEERAH (drums) and AARON MENDOZA (keys) all had extensive experience working with other local groups but as ELECTRIC EMPIRE they established an instant chemistry while their mutual love and respect for the soul sounds of the 60s and 70s soon got them into the studio to work on their debut set. All three band members contributed vocals, wrote the songs and handled production duties; the end result saw their fan base increase dramatically. Live work increased too – with ELECTRIC EMPIRE winning support slots on tours with THE BRAND NEW HEAVIES and MAYER HAWTHORNE.

The album’s lead single is the aforementioned ‘Baby Your Lovin”. Already acknowledged as a soul classic down under, it’s now set to charm the rest of the world with its insidious attractions and old school flavours. ELECTRIC EMPIRE will be touring Europe in the summer too and amongst their high profile shows is a spot at Glastonbury… by then Australia’s best kept soul secret won’t be a secret anymore! For more information go to www.myspace.com/electricempiremusic