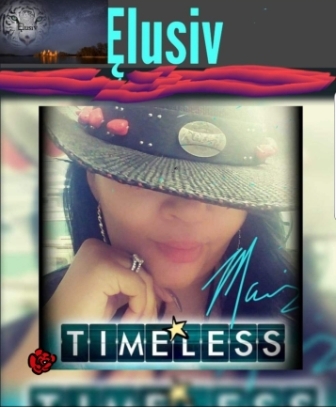 Don’t know too much about new soulstress ELUSIV or her album ‘Timeless’ save that her music is making waves on the underground soul scene. Traces of her on the web are hard to find. What is there is brief and enigmatic… she is, indeed proving “elusive”! What I’ve learned is that she’s called Maria (?) and hails from Detroit. ‘Timeless’ is her debut LP and it was produced by “Mr Groove” – Craig Lane and features BVs from (amongst others) ex Contour Odell Jones and Al Hudson.

It seems that Maria/Elusiv began by posting music on dating sites (?) and in that way she came into contact with Craig Lane and they quickly decided to work together. That “virtual” link up is celebrated in the track ‘U Had Me @ Hello’ . It’s a catchy tune with a booming, male bass voice intro that will remind you of the Temptations. Indeed Maria/Elusiv is a big fan of the Emperors of Soul… she says that the track ‘The Greatest Luv Of All’ is her homage to them.

That crazy spelling is a clue to another influence (I’m guessing) – Prince. So we have ‘N A Minute’ (an attempt at the erotic) , ‘Studda’- about man who stutters (yes!) while ‘Hunger’ is about Vampires! Then there’s ‘Naughtee Girl’ which is described thus: “this is about a woman fantasizing about all the men she’s attracted to in her work place and wherever she goes. For example she starts at work then goes to the gym and then returns to work. She even fantasizes about the Parking Attendant while asking him to park her Car but she has total control over all of them in her Fantasy”.

Odd, definitely, but everything is delivered, in a wonderful contemporary soul sound that has lots of attraction… it’s out now!