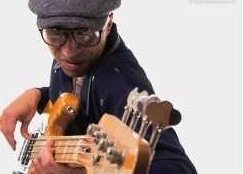 The latest release from SOUL JUNCTION RECORDS is something of a departure from the norm for the West Midlands-based collectors’ label. Till now, the label has specialised in reissuing long lost US soul gems but when label bosses heard the work of Manchester’s ELLIOT MACAULEY, they knew they had to include him in their catalogue.

Macauley is a talented bassist and he’s worked in numerous bands all over the world. In 2000, on returning from working in Barcelona, he built his own studio and began recording indie artist like Winston Warrior, Sian Evans and Kurt Austin.

Elliot has now teamed up with American singer, Joe Leavy and between them they’ve produced an album,’ A Guy Named Joe Leavy’. It’s from that long player that Soul Junction have lifted their latest single release – an uplifting slab of breezy modern soul called ‘All My Life’. It’s totally modern – recorded just last year – but it has that peculiarly old style soul sound that gels with the modern soul crew.

The single’s B side is a lot more complex. The song’s called ‘Mama’s Baby Boy’ and features Cleveland Jones on vocals. This one is taken from a 2013 EP called ‘Retro’. It’s a dreamy, meandering ballad with shades of Marvin Gaye and Leon Ware and again it won’t disappoint the modern soul crowd.