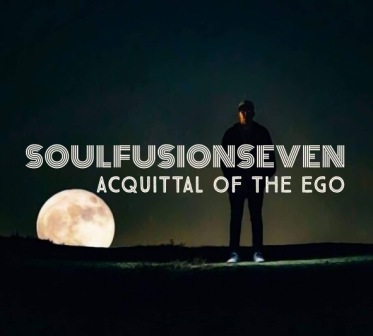 SOULFUSIONSEVEN are soul duo comprising bassist/songwriter John Saltwell and lyricist/manager Paul Baker. We first heard of ’em on a Tom Glide 2014 ‘Smooth Winter’ compilation on which their ‘Steppin’ Up My Love’ was a highlight. The track went on to hit no. 1 in the Amazon Nu soul chart. Naturally we followed the band’s progress with the next single showing their influences and inspiration – ‘Luther’, yes, it was a tribute to Mr V!

Next came a lovely T Groove remix of ‘Steppin’ Up My Love’. Then we enjoyed the band’s ‘Summer Breeze’. No, not a cover of the Seals and Croft/Isley Brothers classic, rather it was a new tune, but it did capture the vibe of long, lazy days, relaxation and a lot more! The next single was ‘Funk It Up’ – however it wasn’t funk as we know it. Rather this one was a sleazy, slinky groove with a sultry vocal from the wonderfully named Amelia Melody.

The next Soulfusionseven single was ‘Turn The Lights Down Low’ – the title described the sound perfectly and very different to the group’s most recent single, Slide’ – a fluid and slippery electro groove.

Now Soulfusionseven have launched a full album… the enigmatically titled ‘Acquittal of the Ego’. The ten tracker offers all the above mentioned singles, so for your investment (if like us, you’ve been tracking the band) you’ll be getting just four new cuts…. the bumpy, Prince flavoured ‘Cool Vibes’, a sax-led instrumental ‘Portuguese Love’ , an atmospheric ‘New York Skyline’ and ‘Lazy Sunday’ (which I think was an earlier B side).

Soulfusionseven’s ‘Acquittal of the Ego’ is a never-less-than-interesting long player and if you don’t know the band yet, here’s the perfect opportunity to hook up with some proper modern soul.