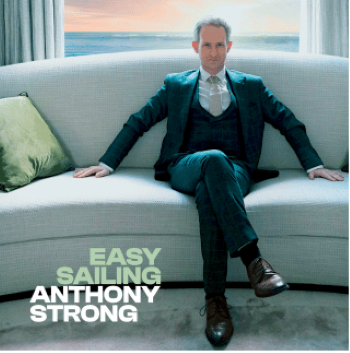 ‘Easy Sailing’ is the latest album from acclaimed English jazz singer/pianist  ANTHONY STRONG. The 15 tracker is Anthony’s fifth studio long player and the repertoire is varied and intriguing. Anthony covers songs by people like Nat King Cole, Hoagy Carmichael, Leonard Bernstein and even the Beatles. The Lennon/McCartney cover is our man’s take on the old chestnut, ‘Yesterday’. He handles it with respect with his piano taking a prominent part over a subtle orchestrated backdrop.

Indeed that orchestration is one of the album’s most striking features. Recorded at London’s Livingston Studios and mastered at the world famous Abbey Road, Anthony marshalled a full string section to add colour, atmosphere, light and shade to his versions of songs like ‘Nature Boy’, ‘When You Wish Upon A Star’ and ‘Straighten Up And Fly Right’. Amongst the other players are bassist Spencer Brown, drummer Andy Ball and guitar man Nick Fitch. Also featured are Callum Au (a Quincy Jones luminary) and tenor sax man Brandon Allen.

The album’s other “name” guest is rising US  vocal star Emmaline who joins Anthony for a laid back but jaunty take on Crowded House’s ‘Don’t Dream It’s Over’ . This is an undoubted album highlight   – little wonder Anthony’s team chose it as the LP’s lead off single. Quite lovely!

On his previous outings, critics have compared Anthony’s oeuvre to Michael Bublé and Jamie Cullum and with ‘Easy Sailing’, those comparisons will surely continue. The album title, by the way, refers to the fact that we’ve been through tough times recently – we’ve certainly not enjoyed easy sailing! However with these new takes on feel-good classics, Anthony’s team say,  maybe we can all enjoy  a much-needed break. Let’s hope so.