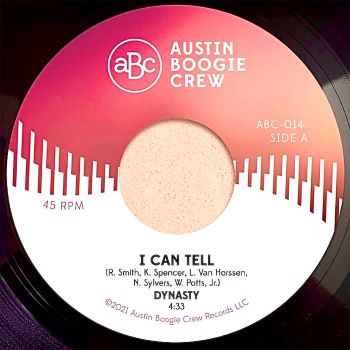 Solar soul/disco band DYNASTY made a big comeback in 2020 with the single ‘Escape’ – a great throwback sound, capturing the upbeat and classic Solar dance sound. At the back end of last year they followed that with another disco-era sounding single – ‘I Can Tell’.

The line-up on the song features the original trio (Kevin Spencer, Nidra Beard and Linda Carriere) alongside drummer Wardell Potts and bassist /keyboardist /producer Ricky Smith and between them they’ve crafted a tight, typically “Solar” dancer.

The Dynasty people have been in touch to remind us that the single is now available in vinyl via Austin Boogie Crew Records. For those of you who like this new fangled stuff!