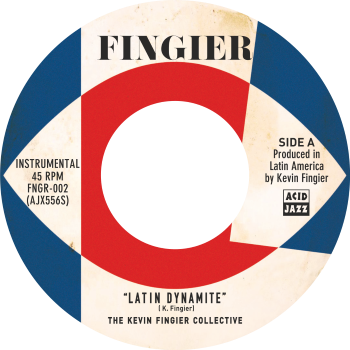 Earlier this year we got to know about Argentinean muso KEVIN FINGIER and his band – the eponymous COLLECTIVE. He released a well-received single that paired ‘Don’t Wanna Cry No More’ with ‘Sunglasses After Dark Part 1’. The former was a rough and tough dancer that mixed 60’s R&B, Northern soul and the fashionable Daptone sound. The tune came highly recommended by Richard Searling – mainly because the featured vocalist was Northern soul legend Gerri Grainger.

‘Sunglasses’ was a Hammond-led soul-jazz affair and that’s the flavour on the A side of Fingier’s new release, ‘Latin Dynamite’. The tune is a proper 60’s basement club throwback – shades of people like Mongo Santamaria and Ramsey Lewis… modern Mod Jazz at it’s best.

There’s more of the same on the B side… a racing, groove-heavy, ‘El Basement’ – essentially a musical duel between screeching Hammond and some crazy Herbie Mann style flute.

The single will be available of Fingier’s own Fingier Records (an imaginative name!). It’s an imprint of Acid Jazz by the way. Release date is 11th December – but it’s a strictly limited edition.