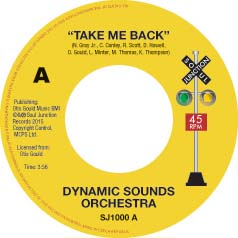 The UK’s SOUL JUNCTION label does a great job rescuing obscure, collectable soul oldies and none more obscure than the two tunes on their latest 7″ vinyl release. Both sides of the new release come from a Chicago nine piece called the DYNAMIC SOUNDS ORCHESTRA… an ensemble who aren’t even a footnote in soul’s history books.

Essentially, the Dynamic Soul Orchestra was formed as the touring, backing band for the Chi-Lites and during their time behind the Chi-Lites the band went through numerous personnel changes. When Eugene Record went solo some of the band went with him and played on his three Warner Brothers LPs. When Record re-joined the Chi-Lites the full Dynamic Sounds team got together again and they even scraped enough money together to record their own album. Sadly, the project was never finished and it was thought all the master tapes that were laid down had been lost in a studio fire.

Fast forward now to recent times when the band’s percussionist, Otis Gould, found an old cassette tape of some of the album tunes. He had the tracks remastered and over the years several have been released via the internet. It’s two of those recordings that Soul Junction has licensed for their latest single. The A side is a busy, bustling, brassy dancer called ‘Tale Me Back’ which features a great proper soul gritty vocal. The B side shows the Dynamic Sound orchestra in ballad mode. ‘All I Wanna Do is Love You’ is a lazy, rambling slowie which despite its uptown credentials has a rustic quality.