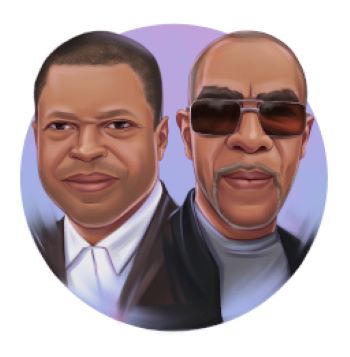 Both originally hail from Birmingham where they began in gospel before moving on to playing in local bands. Elliot went on to form Medium Wave – a soul combo which featured Jakki Graham.

Over the years the friends lost touch but, through a mutual friend, they reconnected during the first lockdown and thus ERBF was born. The pair had a lot of old song between them and they were quickly polished and updated and then Elliot and Richard set about recording some of the best. Elliot plays guitar while Richard takes on bass and keyboard duties as well as production on the tunes.

Augmented by talented session singers and players, ERBF have just launched their first single a lovely combination of ‘Decided’ and ‘Matter of the Heart’. The former, with vocals from Raena, is a great dancer with a distinct 80s soul weekender vibe. Elliot says the song was inspired by his relationship with his wife… sweet! ‘Matters Of The Heart’ is different again – a stark but lovely ballad. This is one of Richard’s songs and he says it’s about the tensions and emotions that are an integral part of confronting difficult choices. There’s a strong male vocal – uncredited on my copy: all ERBF say is that’s it’s a Manchester singer who right now wants to remain anonymous… intriguing!

‘Decided’ and ‘Matter of the Heart’ – two fine but different soul sides and we’re told there’s more to come from ERBF very soon.