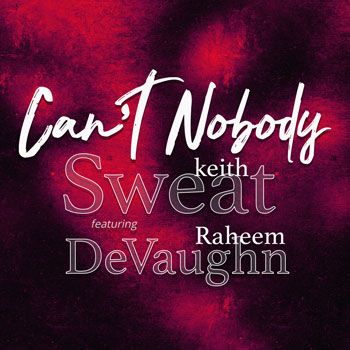 Students of US soul charts will have noticed a catchy, new cut climbing the ratings – ‘Can’t Nobody’ a song that features the inspired pairing of KEITH SWEAT and RAHEEM DeVAUGHN

Of the record Keith says: “At This stage of my career, I make music that moves me to say something. I am not interested in releasing music for the sake of statistics. I really became a fan of Raheem last year when we worked together and wanted to do a song with him. This is the result of that collaboration and I hope you enjoy it.”

For his part Raheem adds: “I am truly honoured to finally have a record with Keith Sweat. Keith has sold over 25 Million records and is the Godfather of R&B and I look at this collaboration as bridging the gap between generations of R&B crooners. I know for a fact that “Can’t Nobody” is a big hit record and is going to be major for the culture of Soul and R&B”.