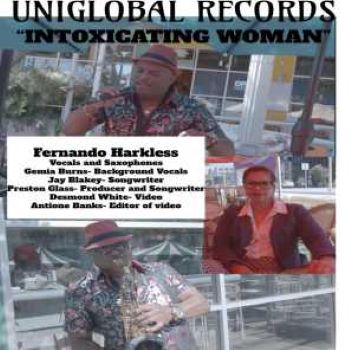 FERNANDO HARKLESS is  US sax and flute player who also sings. He cites his influences as people like the Temptations, Grover Washington and Miles Davis and he’s worked with (amongst others) Marvin Gaye, Snoop Dogg, The Four Tops, Rick James, Charlie Wilson & The Gap Band, Mariah Carey and War. Quite a CV!

Right now Mr H works out of LA fronting a band called Fernando and Spice and, we’re reliably informed, many who’ve enjoyed his shows have dubbed him “a modern day Junior Walker”.

See how accurate that description is by investigating his latest single – an odd, quirky little tune, ‘Intoxicating Woman’. The song was penned by Jay A. Blakey and Preston Glass and “is based on female and male encounters that’s exhibited in everyday life right before your eyes.”. More obliquely Mr Harkness adds: “When the bestiality of animal awareness flies out from inside an enamoured soul -and they want and desire this other person, all cunning methods, tricks or traps will be used to get them. The girl power skills in this game have proven to be more slick than any other species, (sorry guys). So as this revelation reveals itself in this song, dig down deep inside your mind and soul and ask, has this happened to you, or have you been guilty of this yourself?” So now you know!