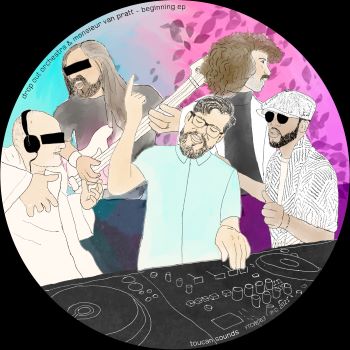 THE DROP OUT ORCHESTRA are a Swedish dance music duo who say, “we take our cues from original Disco pioneers such as MFSB”. They kicked off in 2008 mixing and editing tracks by everyone from TLC and Daft Punk to Rick Astley and The Sex Pistols! Again, they say, “we transformed them into the kind of luxurious, gloriously sophisticated, and indeed soulful disco, that would have made Chic proud.” So, there you go!

You can sample what the Drop Outs have to offer via a new four track EP – ‘Beginning’- which is due for release in April.

The mini album kicks off with the bass-heavy ‘Glitter’ which the band describe as a “party starter”. It’s a homage to disco’s golden age (the clue’s in the title). It features horns, saxes, heavy bass lines and chinking Chic style guitars. It’s followed by another big dancer, ‘Feel Great’ which features a vocal from New York soul singer Shareef Keyes. ‘Get Busy’ is the third offering. It’s a decent modern soul outing with a lush baritone vocal from Pink Flamingo Rhythm Revue (aka Eric “Doc” Mendelsoh) and sweet horn parts. The EP closes out with ‘Organ Fett’ – a synth-led disco dancer.

The ‘Beginning’ EP has been mixed by Mexican DJ/producer and owner of Super Spicy Records, Monsieur Van Pratt and between them the team have put together a catchy dance package. It won’t set the world alight – it’s not meant to. It’s just intended to bring back good times through the medium of unfettered dance music.