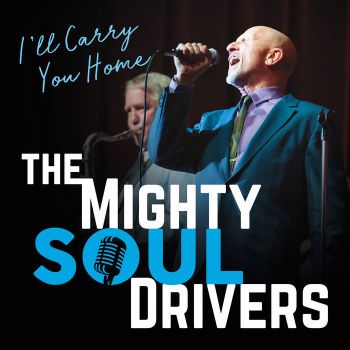 THE MIGHTY SOUL DRIVERS are a US blue-eyed soul band founded in 2012 by drummer, singer and blues DJ, River City Slim (Peter Rost) and singer-songwriter Bob Orsi. Based in New England, their mission statement was to create band that could deliver a high calibre, old school soul and funk show. Their mutual passion was the music of Memphis, Muscle Shoals, and all points South and by all accounts they cook up a proper soul storm at their live shows. The band  debuted on disc in 2016 with the album ‘Qualified!’ Now  as a 7 piece (Larry Willey – guitar, Tony Delisio – bass, Steve Donovan – keyboards,  John Smayda – saxophone, Neil Tint – trumpet and Rost and Orsi), they follow up with ‘I’ll Carry You Home’.

The album features seven new original tunes along with four carefully chosen covers. The album’s title track is one of the original songs. Penned by Orsi, it’s a gentle Southern flavoured groove. Elsewhere, the sound is a little less restrained. So, ‘A Little Bit Of That’ is a tougher tune with prominent Hammond fills and a tasty sax and trumpet solos; ‘Piece Of My Pride’ offers a slightly different vibe, it opens with some old time, barrel house piano before mining a New Orleans musical vein.

The album’s four covers offer plenty of interest. The opener is the band’s version of the Temptations’’ ‘I Can’t Get Next To You’. Here they swop the psycho-soul feel with a slow funky groove to craft something quite different. Then there’s the Solomon Burke classic, ‘Cry To Me’. Here the band don’t stray too far from the original. Ditto, the pulsating treatment of Etta James’ ‘Tell Daddy’ while the Drivers dip into a bluesier palette for their version of Bobby Bland’s ‘I Wouldn’t Treat A Dog’.

The Mighty Soul Drivers’ ‘I’ll Carry You Home’ is an honest and heartfelt take on classic blues and Southern soul and it’s released on Friday October 7th via Hog heaven Records and via CD Baby.