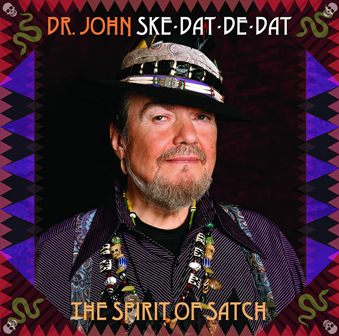 Saturday 6th June marks the first anniversary of the passing of DR JOHN. Mac Rebennack, a 6 times Grammy winner, was, as Dr. John, recognized as the embodiment of the musical legacy of New Orleans and back in 2014 he released an acclaimed album in tribute to another Big Easy music icon… Louis Armstrong. The CD was called ‘Ske Dat De Dat – The Spirit of Satch’ and the good Dr said he was inspired to record it after Armstrong appeared to him in a dream! Dr. John’s status was such that when he came to make the record he could call on some stellar names to help him flesh out his ideas on how to cover some of Satchmo’s best known songs. So helping him out on  ‘Ske Dat De Dat’ were people like Bonnie Raitt, The Dirty Dozen Brass Band, Ledisi, Arturo Sandaval, The McCrary Sisters, Terrance Blanchard, Anthony Hamilton and the Blind Boys of Alabama who feature on a couple of tracks including the opening – a lovely take on ‘What A Wonderful World’ which also features Nicholas Payton on trumpet.

Amongst the other featured songs are ‘Mack the Knife’ (with Terrance Blanchard and Mike Ladd), ‘I’ve Got The Whole World On A String’ (with Bonnie Raitt) and, the album closer, ‘When You’re Smiling’ (with the Dirty Dozen Brass Band). Soul highlight is Anthony Hamilton’s searing version of ‘Sometimes I Feel Like a Motherless Child’.

The good news is that the CD is still available and the better news is that to mark the first anniversary of Dr John’s passing the Last Music label will be issuing the LP on limited edition vinyl. They say its release is a celebration of two stellar artists and it will be available from June 5th.