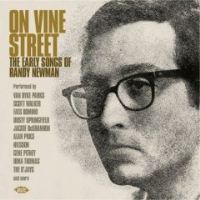 Though not a soul compilation per se, Ace’s new look at the early songwriting work of RANDY NEWMAN, ‘On Vine Street’ includes some searing soul archive material. NEWMAN, of course, is now known as a quirky, eclectic singer-songwriter, but he began his musical career as a jobbing writer peddling his tunes alongside the famed Brill Building luminaries. As such many, many soul artists and producers picked up on his work and some of the best take pride of place on this 26 tracker. Included are cuts from LORRAINE ELLISON (‘I’ll Be Home’), IRMA THOMAS (‘While The City Sleeps’), ERMA FRANKLIN (‘Love Is Blind’) and GENE McDANIELS (‘Somebody’s Waiting’). There’s also a rare ’66 cut from the O’JAYS – ‘Friday Night’ – and DUSTY SPRINGFIELD’S definitive reading of ‘I Think It’s Going To Rain Today’. You also get lots of superlative 60’s pop, like JACKIE DE SHANNON’S ‘Take Me Away’. The TOKENS’ ‘Just One Smile’ and SCOTT WALKER’S angst-laden ‘I Don’t Want To Hear It Anymore’.

Tags: DOWN ON VINE