DOWN ON BAKER STREET… 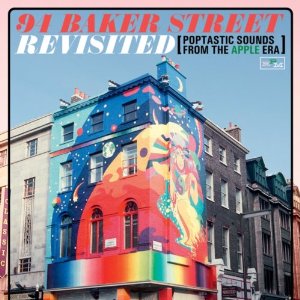 London’s Baker Street is famous for a number of things… the title of a haunting pop hit, the Tube station from which you access the famous Madame Tussaud’s Wax Works and, of course, the fictional home of the detective, Sherlock Holmes. For a glorious time in the late sixties it was also home of the BEATLES’ Apple Organization. After the death of manager BRIAN EPSTEIN, the FABS set up Apple as an all-embracing entertainment/cultural company that would issue their music, their films, their merchandise; a company that would also mount art exhibitions and “happenings”, sponsor theatre shows, sell clothing, publish music and, importantly, encourage new talent – not just in music but right across the arts spectrum. It was an idealist dream that floundered as people less altruistic than the foursome exploited their naive business optimism.

A new release on RPM Records highlights one aspect of the work of mid-60s Apple. ’94 Baker Street Revisited’ is a 22 track compilation of what are essentially demo recordings of material that writers loosely contracted to Apple produced to float on the musical market. The artists/writers names will mean very little to most (other than serious 60s music students) but they include BUDDY BRITTEN, BARRY ALEXANDER, THE PERISHERS (who as THE SEFTONS were an acclaimed Merseybeat band) and the RIGHTS OF MAN –who became cult band GRAPEFRUIT.

Musically, the sound is, as you’d expect, 60s pop – with a heavy BEATLES flavouring (witness ‘Any Day Now’ from the COCONUT MUSHROOM) but there’s also a smattering of tunes that are influenced by the then underground popularity of soul and R&B … try the sparse, pacey ‘Hold On’ from JOKER (coulda been a Northern contender!)…. whatever, enjoy “poptastic sounds from the Apple era” – as the album’s sub-title claims.

94 BAKER STREET REVISITED is out now on RPM records