DOWN IN CLINTON PARK…. 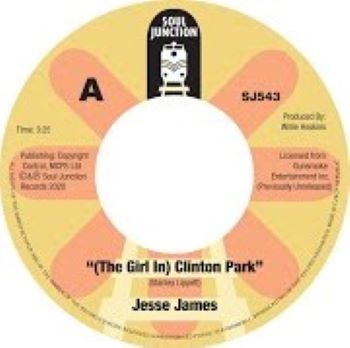 Indie soul anoraks might be familiar with the song ‘(The Girl In) Clinton Park’. It was released in 1974 on Fos-Glo/Delite by the Masterplan. What the anoraks might not know is that the lovely harmony cut was a cover of a 1971 recording by JESSE JAMES. Penned by Stanley Lippett and produced by Willie Hoskins (famed for his work with the Natural Four), for all kinds of reasons, Jesse’s version was never released.

Now to proper soul collectors’ collective delight, the UK’s SOUL JUNCTION label has released the Jesse James version of ‘(The Girl In) Clinton Park’ on 7” vinyl and it really is a delight. Fronted by a short monologue, it develops into a lovely sweet but never sentimental tune with Jesse in great vocal form. Interestingly the object of affection in Clinton Park (a housing project, by the way) is the three-year-old daughter of singer Marvin Holmes (who lived in Clinton Park). Marvin had been a long-time friend and collaborator of writer Stanley.

Interestingly (again!) the tapes only came to light earlier last year when, during the pandemic with not a lot to do, Jesse had a big sort out and found the master tape of his lovely original ‘(The Girl In) Clinton Park’. So, something good has come out of the pandemic!

For the release Soul Junction have paired the song with James’ version of Terry Callier’s ‘Just As Long As We’re In Love’ which was first made available on a Soul Junction CD collection on Jesse James.

JESSE JAMES: ‘(The Girl In) Clinton Park’/ Just As Long As We’re In Love’ out now on SOUL JUNCTION 7” vinyl.