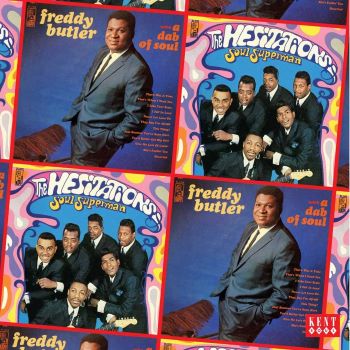 For many years Ace/Kent have served  the  soul collector admirably with classic after classic and in-demand item after in-demand item regularly released. Those releases have usually taken the form of expertly curated compilations or single artist sets. Their latest release is a little different in as much as it turns the focus onto two soul acts – THE HESITATIONS and FREDDY BUTLER. This new style of “twofer” pairs the Hesitations’ 1967 ‘Soul Superman’ album with Butler’s ‘A Dab Of Soul’ from the same year. The link is that both albums were products of Jack Ashford’s Pied Piper production company. Licensed to Kapp Records, the two LPs didn’t mean too much on release – but, yes, it’s the same old song, both albums are now hugely collectable, fetching three figures sums on the collectors’ scene. So, how kind of Ace/Kent to make them both easily and cheaply accessible for us lesser mortals who lack the funds for big buck items!

The Hesitations originally hailed from Cleveland and went through several name changes and various line-ups before pitching up in Detroit to audition for Motown. The Gordy execs weren’t impressed (they said they sounded too much like the 4 Tops!) but they did impress Shelley Haims – a music biz hustler about to set up Pied Piper Productions with Motown alumnus, Jack Ashford. We’re told  that Ashford wasn’t as impressed as his partner but he honoured  the commitment  and cut an album on the group using, mainly, session players from Motown. Not surprisingly then the album, named for group’s ‘Soul Superman’ hit, is full of Motown-esque flavours. Other highlights  include ‘She Won’t Come Back’, ‘You Can’t By Pass Love’, ‘That’s What Love Is’ – the backing track of which would be reused on Northern hit Eddie Parker’s ‘I’m Gone’ – and the more mellow ‘You’ll Never Know’. Odd, when they were rejected by Motown, the Hesitations were told they sounded like the 4 Tops, I don’t get that: repeated plays suggest they sound more like the Fantastic Four!

Freddy Butler was a more sophisticated ballad singer who also played guitar. Prior to working with Pied Piper, he’d recorded for labels like M&M, Samo, Starmaker and Wheelsville without too much success and sadly, even with Jack Ashford in his corner, he never made  the major leagues. Despite this, his work is hugely collectable and you can hear why on things like the lovely ‘I Like Your Style’ and ‘Just Because You’ve Been Hurt’ – classic, big city 60s soul sounds. The real highlight on his album though is the sublime, ‘That’s When I Needed You’ – an absolute aural definition of 60s uptown soul (think Deon Jackson’s ‘Love Makes The World Go Round’) and even though it’s a mid-tempo item the track has long been popular on the Northern scene.

Many of the cuts on this 24 tracker have been reissued before by Ace/Kent on various Pied Pier compilations but’s it’s lovely and more meaningful to have them all presented like this. For Detroit collectors, this is THE reissue of the year!