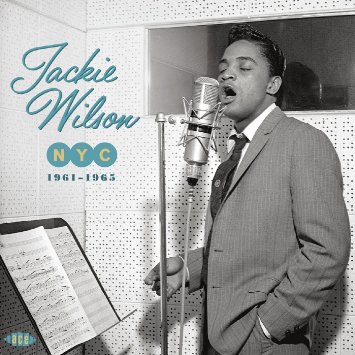 Despite being one of soul’s founding triumvirate, Jackie Wilson has been poorly served by the reissue labels. Sure there are plenty of “greatest” and “best of” albums around but more specific material is harder to find. The new Kent album – ‘JACKIE WILSON NYC 1961-1966’ will fill in some gaps for both Wilson fans and general soul collectors. The album is a generous 2CD, 48 track collection which, as the title says, features material the onetime pugilist recorded in New York between 1961 and 1966. The collection is stuffed with unreleased items (24 in total) and there are also plenty of alternate mixes of some more familiar material. The Ace music ‘tecs found the tracks whilst scouring the Brunswick vaults and to add some period authenticity, the compliers have left in some of the studio banter between Wilson and producers Nat Tarnopol and Eddie Singleton.

Musically, you’ll hear Jackie on the cusp of the old and the new…. plenty of dramatic balladry and old school R&B but also plenty of the sweet, mid 60s uptown soul so beloved of collectors. Amongst the gems are ‘All My Lovin” – a potential Northern tune – and ‘Call Her Up’, already a favourite on the growing R&B club scene. The album also boasts a number of duets featuring Jackie with Lavern Baker and Linda Hopkins.

Philadelphia’s Garnet Mimms was never as successful or well-known as Jackie Wilson, but he’s revered by soul collectors too, always glad to pick up on any of his recordings. Here Kent offer a 28 track collection called ‘LOOKING FOR YOU’ which brings together all the singles the one time doo-wopper recorded for United Artists and Veep. Naturally his signature songs are here – indeed ‘Cry Baby’ kicks off proceedings. But also enjoy a searing version of the Impressions’ ‘For Your Precious Love’, a lovely Drifters-esque ‘A Quiet Place’ and a tear-jerking take on Walter Jackson’s’ Welcome Home’… mid sixties East Coast uptown soul at its very best. Of course, there are already a number of Mimms’ collections out on the racks, but this is the first time that all his US singles have been assembled on one disc