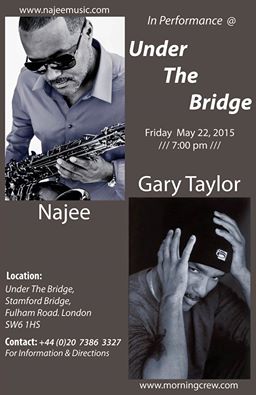 Two of America’s biggest names in smooth jazz and indie soul will be coming to the UK for a very special concert at the Stamford Bridge venue, Under the Bridge. Sax superstar, NAJEE will be joined by acclaimed singer/songwriter, GARY TAYLOR for one special night – Friday, 22nd May.

Najee is a smooth jazz founding father and he has of course, worked with almost every major name in the soul and jazz field including Quincy Jones and Stevie Wonder. He’s already won two Platinum albums and four Golds and he’s currently putting the finishing touches to a new set which will be out just prior to the Chelsea gig.

Soul man, Gary Taylor debuted way back in 1983, but it was his album on Expansion Records album, ‘Take Control, that made the UK soul crowd take him to their collective heart. Since then Gary gone on to write songs for people like Anita Baker, The Whispers, Will Downing and, of course, Najee. And like Najee, he’s finishing off his brand new release…..

Find out more about this very special show by contacting the venue…. Under The Bridge @ Stamford Bridge.