DON’T YOU WANT MY LOVE? 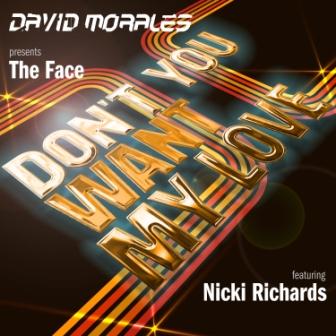 ‘Don’t You Want My Love’ is the latest outing from dance legend DAVID MORALES. For the cut New York’s finest goes back to his Disco roots, unleashing a breathtaking cover version of the late 70’s Debbie Jacob’s classic disco tune. The cut was an ever present in his DJ box and knowing it was a floor filler, Morales decided to recreate it under his “The Face” moniker. Helping him deliver this heavy hitter is vocalist Nicki Richards.

The Face’s ‘Don’t You Want My Love’ comes in two mixes – a proper “disco” mix and a thumping “Glitterbox” mix which clocks in at over ten minutes. For the faint hearted there’s a shorter radio edit!

‘Don’t You Want My Love’ is out now on Def Mix Music.