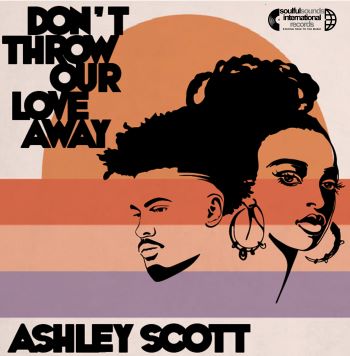 Over the past few years, we’ve enjoyed some excellent singles from US soul man ASHLEY SCOTT. His ‘Dance The Night Away’ was particularly popular and proof of his musical pedigree, background and education. You see Mr. S is the nephew of the Three Degrees’ Helen Scott and he studied at Howard University under tutors like Grady Tate and Webster Lewis! He was also a member of the famed Howard University Gospel Choir and since graduating, he’s shared stages with people like Jean Carn, Vivian Green, Bilal, Marcus Johnson and Take 6 and  young Ashley has also worked with Will Downing (he was on his business team).

Ashley’s latest offering is a sweet and soulful springtime groove, ‘Don’t Throw Our Love Away’. Lyrically the song is about the protagonist not wanting to end a long-term relationship with his lady… obvious from the title really, but it’s the vibe that delivers the magic. There’s a real Philly flavour about proceedings and the sax of Elan Trotman is a delight throughout as it trades lines with Ashley’s soulful vocal.

Don’t Throw Our Love Away’ will be released on Ashley’s own  Soulful Sounds International Records Label on April 23rd.