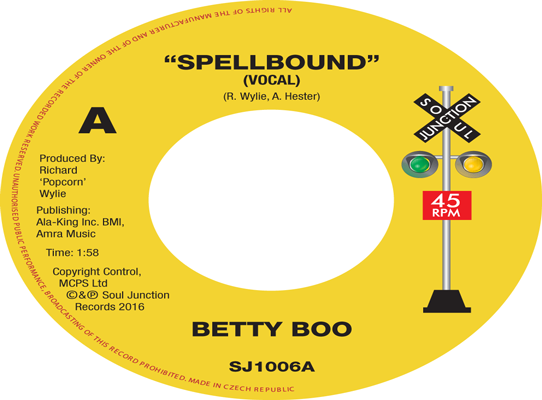 BETTY BOO is the alter ego of Betty Winston, who, soul anoraks will know, was, along with sister Jackie and Pat and Diane Lewis, part of the girl group, the Adorables. The Adorables recorded for Ed Wingate’s Golden World label with their most popular recording being the in-demand ‘Ooh Boy’.

After Berry Gordy bought out Wingate, the Adorables and their various members continued to record at Golden World under the auspices of Popcorn Wylie. One of those sessions produced ‘Spellbound’, credited to Betty Boo. (Though archive notes reveal that the other Adorables were there on BVs). The tune is a thrusting, pacey Detroit dancer and little wonder that it became a big Northern sound when it appeared on a ‘Sound Of The Grapevine’ album.

‘Spellbound’ is still popular and much in demand, so to satisfy the need Soul Junction have just released the cut on 7″ vinyl. The B side, by the way, is the equally urgent instrumental version which has never been released on any format before now.