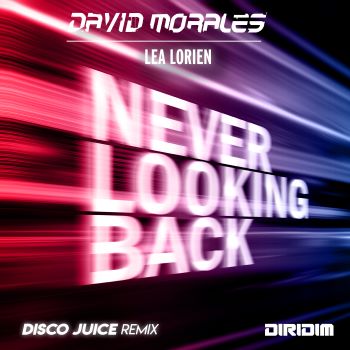 By common consent of this year’s best albums so far has been the DAVID MORALES’ set, ‘Life is A Song’. It boasted a plethora of dance floor gems – and one of ‘em, the Lea Lorien-vocalised ‘Never Looking Back’ has just won remix status. In fact Mr. M and his teams have given the already energized tune two heft-loaded reworks.

First up there’s the “SR” mix – with SR (you’ll know) standing for SANDY K.O.T. RIVERA! This  new tweak keeps all the soulful essence of the original album cut while managing to crank up the groove quotient even more.

The second mix comes via David himself alongside the ever-dependable NIGEL LOWIS. They call their re-tooling a “Disco Juice” mix  and the end result offers what it says on that titular “tin”! Yep, it’s a glitter ball delight – and , importantly, soulful rather than cheesy! It’s a proper disco delight!

Little to choose between these two new iterations and don’t forget the original mix was (indeed IS) a winner too… three slices of Morales magic and let’s not forget the great part played by Ms Lorien on this one.

Both new mixes out now via Traxsource!