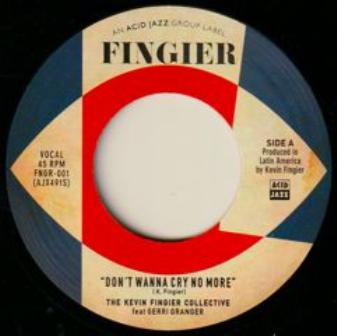 When a certain RICHARD SEARLING describes a new single as “The must-own 45 of 2020 is here… both sides of this limited edition 45 are incredible”, I guess you need to investigate! Well investigate we did and the little 7″ that Mr S BEM describes comes from an odd source… Argentina!

Label is FINGIER RECORDS and the credited artists are the KEVIN FINGIER COLLECTIVE. Fingier is an Argentinean muso who began by fronting a reggae band, Los Aggrotones. Kevin has also DJd for many years and works to promote Soul & Mod culture in Argentina. More recently, the co-founder of the Buenos Aires Soul Club decided to start a production career working on Soul and R&B recordings and the record Richard S is enthusing about is a Fingier double A-sider ‘Don’t Wanna Cry No More’ / ‘Sunglasses After Dark Part 1’.

The former is a rough and tough dancer that mixes 60s R&B, Northern soul and the fashionable Daptone sound but this cake’s cherry is the vocal – as authentic as you can get… you see Kevin has drafted in Northern legend Gerri Granger to add real magic. Throw in a crazy Herbie Mann style flute break and no wonder Searling was impressed. The ‘Sunglasses’ side is an atmospheric mod jazz instrumental dancer with fat Hammond and tinkling vibes adding to the intrigue.