DONNY H: ALL BOXED OFF 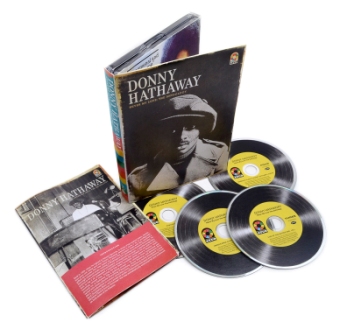 This four-disc retrospective is designed to underscore that continuing impact by combining the singer-songwriter’s essential studio and live tracks with 23 previously unreleased recordings. The boxed set also includes an extensive, illuminating essay about Hathaway’s life and music written by the UK’s premier soul journalist and co-writer/owner of SJF, Charles Waring.

The first disc retraces the arc of Hathaway’s career – from his beginnings in St. Louis, through his work with Curtis Mayfield and on to his own studio albums. The next disc uncovers 13 unreleased studio recordings spanning a full decade (1968-1978) including several tracks from the mid to late 1970s, often thought to be a period of musical hibernation for Hathaway. Among the unheard gems are: ‘Never My Love,’ a song recorded shortly after the sessions for ‘Extension of a Man’; ‘A Lot Of Soul,’ a Nashville-flavoured track that recalls Hathaway’s arrangements for Willie Nelson’s ‘Shotgun Willie’; plus ‘Zyxygy Concerto’ an epic classical piece that features piano and a full orchestra.

The third disc expands upon the gold-certified album ‘Live’ (1972), a widely acclaimed collection of Hathaway’s electrifying performances recorded in clubs in L.A. and New York. A few performances left off the original album have surfaced over the years, but nothing like the trove featured here. The set includes 10 previously unissued live recordings from Hathaway’s residency at The Bitter End in New York’s Greenwich Village. These tracks include a brilliant version of the soul anthem ‘What’s Going On’ and an incendiary take on ‘Voices Inside (Everything Is Everything).’

The final disc covers the many memorable hits recorded by Hathaway and Roberta Flack, one of the 1970’s most successful musical partnerships. They scored three certified-gold singles together in the ’70s: ‘You’ve Got A Friend’ (#8 R&B/#29 pop) and ‘Where Is The Love’ (#1 R&B/#5 pop) from the bestselling LP ‘Roberta Flack and Donny Hathaway’, plus the immortal ‘The Closer I Get To You’ (#1 R&B/#2 pop) from ‘Blue Lights In the Basement’. And in 1980, a year after Hathaway’s death, they returned to the charts again with ‘You Are My Heaven’ (#8 R&B/#47 pop) and ‘Back Together Again’ (#18 R&B/#56 pop), two tracks from ‘Roberta Flack featuring Donny Hathaway’.

NEVER MY LOVE: THE DONNY HATHAWAY ANTHOLOGY is released on RHINO on November 11.