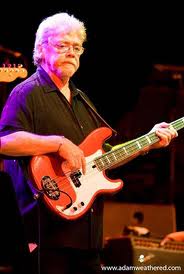 The MG’s were, of course, the house band for Stax records and DUNN featured on almost every major hit cut in the Stax studios as well as featuring on the MG’s’ own records. He’d joined the band after original bassist LEWIS STEINBERG quit and stayed with them till the unit all but disintegrated in 1971

The bassist had been in the Japanese city to play a series of concerts as part of a Stax show, featuring MG’s guitarist STEVE CROPPER and vocalist EDDIE FLOYD, and had played two gigs on Saturday night. CROPPER posted on his Facebook page that DUNN had died in his sleep on the morning of May 13. .He wrote: “Today I lost my best friend; the world has lost the best guy and bass player to ever live. DUCK DUNN died in his sleep Sunday morning in Tokyo Japan after finishing 2 shows at the Blue Note Night Club.”

BOOKER T AND THE MGs were admitted to the Rock and Roll Hall of Fame in 1992. DUNN also received a Lifetime Achievement Award at the Grammys in 2007.