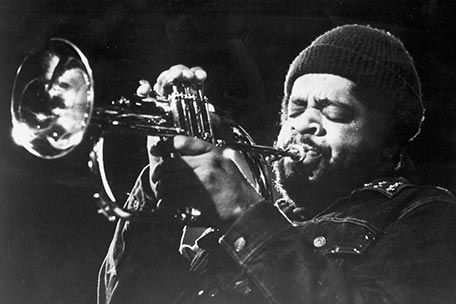 SJF is sad to report the passing of legendary jazz trumpeter, DONALD BYRD, who died on February 4th in Delaware at the age of eighty.

He might have been vilified by the jazz purists when he abandoned straight-ahead jazz for a more commercially-oriented funk and fusion sound in the ’70s but Byrd achieved what many jazz musicians failed to do by making the charts, landing gold records and reaching a huge and hungry global audience with his music.

Baptised Donaldson Toussaint L’Ouverture Byrd II in Detroit in 1932, Byrd was an ambitious minister’s son and after successfully studying for a degree in music he became one of the hottest young hard bop talents in New York during the late ’50s, recording with such jazz luminaries as Art Blakey, John Coltrane, Max Roach, Sonny Rollins, and Pepper Adams.

A prolific album maker – he recorded for Riverside, Savoy, Transition, Prestige and Bethlehem before landing at Blue Note in 1959 – Byrd also had a parallel career as an academic and when he wasn’t recording or out on the road taught law at university (he graduated with a degree in law in 1976).

Musically, Byrd’s career can be divided into two phases. Prior to 1970 he was an exponent of bebop (or hard bop, its blues and gospel-infused offspring) and after that he was a pioneer of jazz fusion. In 1972 Byrd’s life and music changed dramatically when he teamed up with writers/producers Larry and Fonce Mizell (formerly part of Motown’s The Corporation production team) and released the LP, ‘Black Byrd.’ Marrying infectious trumpet hooks with soulful funk grooves and vocal choruses, the pathfinding album was a huge commercial triumph and transformed Byrd into a jazz superstar. Byrd’s productive partnership with the Mizells continued with the subsequent albums ‘Street Lady,’ ‘Steppin’ Into Tomorrow,’ ‘Place & Spaces,’ and ‘Caricatures.’ It was during the same timeframe that Byrd was the musical mentor for the Washington DC group, The Blackbyrds, who were comprised of some of his former students.

In 1978, Byrd signed to Elektra, where he cut four R&B-infused albums for the label before winding down his recording career and concentrating on a career in academia. After that Byrd’s recording were few and far between though he did resurface in the 1990s via cameo appearances on two albums by rapper, Guru.

More recently, in 2009, Byrd became the artist-in-residence at Delaware State University though the ill-health he had experienced throughout the first decade of the 21st century meant that his public performances were infrequent.