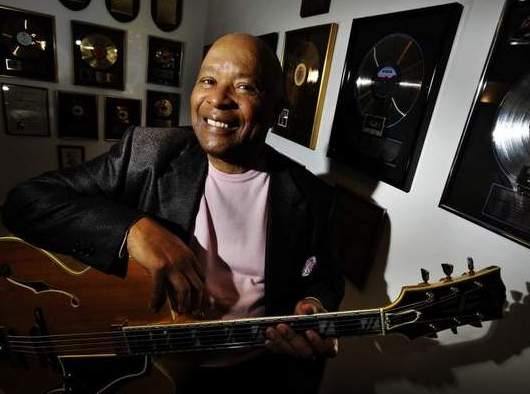 Davis was born in Detroit in 1938 and began his music career as a session guitarist at Motown. He’s credited with playing on early classics like Barrett Strong’s ‘Money’. He also played on records released on other Detroit labels like Thelma, Golden World, Ric-Tic, Revilot and, naturally, his own Groovesville imprint. It’s also Don’s guitar on the 60’s classic ‘Cool Jerk’ by the Capitols – the track featured a number of other Motown Funk Brothers and in his memoirs Davis fondly remembers being paid $10 for the session. He added that it took just five minutes to record!

Davis then moved into production, eventually landing a job with Stax – though he remained based in his native Detroit. His biggest success at Stax was his helming of Johnnie Taylor’s ‘Who’s Making Love’. Interestingly, the record also featured Motown backing singers, The Andantes… though they were never officially credited. Pat Lewis of the Andantes was also featured on another key Don Davis/Johnnie Taylor collaboration, ‘Disco Lady’… Billboard’s first Platinum single.

Don Davis also had a key role in the career of the Dramatics. Davis originally signed the rookie group to his Groovesville label then took them to Stax, where, in collaboration with Tony Hester they became major stars with hits like ‘Whatcha See Is Whatcha Get’ and ‘In The Rain’.

Most of the Dramatics and Johnnie Taylor’s output were recorded at Detroit’s famous United Sound Studios, which Davis bought. The studio was also the base for George Clinton’s recordings and experimentations. Other artists produced by Don Davis include The Dells, Harvey Scales, Rose Battiste, David Ruffin, The Staple Singers and Marilyn McCoo and Billy Davis Jr.

In 1970 Davis began to forge a parallel career in banking. He set up the First Independence Bank, Michigan’s only African-American-owned and operated commercial bank. Davis eventually settled in Detroit’s West Bloomfield Township and is survived by his wife Kiko and three children.

One time Motown colleague and Davis’s second cousin, Martha Reeves commented, “Don was a classy man, such grace and poise and I was overwhelmed by his accomplishments. He really could play the guitar, too, but he set it aside to run the studio and record other musicians.” Detroit’s mayor Mike Duggan added, “I was deeply saddened to hear about the passing of Don Davis, one of Detroit’s great icons. Don was the epitome of Detroit’s can-do spirit, having founded Michigan’s only minority-owned bank, First Independence, which he used as a vehicle to uplift countless residents of our city throughout the years. His presence will be sorely missed, but his legacy will endure and should be celebrated all Detroiters. My prayers go out to the Davis family.”