DOIN’ WHAT YOU’RE SUPPOSED TO DO…. 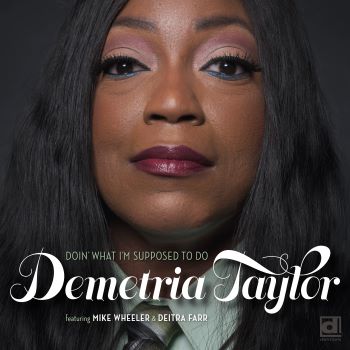 DEMETRIA TAYLOR’S name may be familiar to blues collectors. She was recently awarded the KoKo Taylor “Queen of the Blues” Award, given by the Jus’ Blues Foundation. As important, maybe, is the fact that Demetria is the daughter of the legendary Chicago blues guitarist, Eddie Taylor! So what better title for her latest album than ‘Doin’ What I’m Supposed To Do’? For sure Ms T was born to sing the blues and the proof’s here right across the concise 12 tracker.

Poignantly the album opens with a cover of one of her father’s  best known tunes – ‘83 Highway’. Aggressive and biting, its sets the tone for what’s to follow- plenty more traditional electric Chicago blues like ‘Welfare Blues’, ‘I’m Gonna Tell It’, ‘Blues  Early This Morning’ (which was written by Demetria’s mother, Vera), the tongue-in-cheek ‘Nursing My Kitty Cat’ (listen up to a great barrel house piano solo here from Brian James) and the cover of Magic Sam’s ‘You Belong To Me’. For variety, ‘Baby Be Good’ and the album’s title track veer towards the soulful side of the blues.

Throughout, Ms T has stellar support from the Mike Wheeler Band and guitar star Carlos Showers and you can probably guess that the album was recorded in Chicago – the music has Windy City Blues stamped on every track.

DEMETRIA TAYLOR: Doin’ What I’m Supposed To Do out now via Delmark