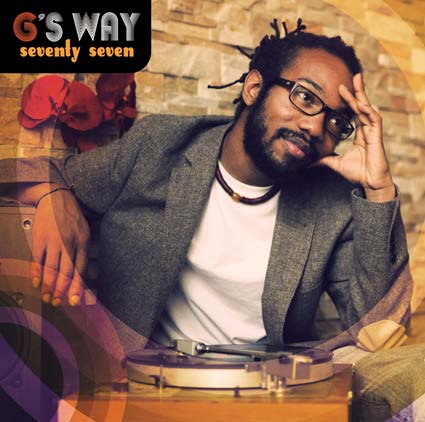 G’S WAY is an innovative French jazz combo led by multi instrumentalist GERALD “G C” BONNEGRACE. For the last ten years G C has worked in and around the experimental Parisian jazz scenes as a percussionist, but – no mean keyboardist and brass player himself – he’s decided that the time’s right to sort out his own album…. et voila – here it is.

Released on Up-Tone Records, G WAY’S ‘Seventy Seven’ is an unashamed homage to the soul, jazz and funk of the 70s. The ten track LP can trace its lineage back to the pioneering music of people like HERBIE MANN, TOWER OF POWER, RAY BARETTO, EUMIR DEODATO, FELA KUTI and GROVER WASHINGTON JR. and to help him out Monsieur BONNEGRACE has drafted in the cream of the Parisian jazz scene – THIERRY “JP GROOVE” JEAN-PIERRE on bass, CHRISTIAN TEMPLET on drums, STEFANE GOLDMAN on guitar and SYLVAIN “SLY” FETIS on Baritone and Tenor saxophone.

Together they concoct a heady cocktail that is part Latin, part funk, part soul-jazz and part jazz-fusion. The set is topped and tailed with a pair of Latin-jazz romps – ‘Latin Bubbles’ and ‘Kiss And Fly’ and in between there’s all kinds of big, brash flavours. Listen up in, partculauar, to the funky, flute-led title cut and the fast and frantic ‘Escapade’.

G WAY’S ‘Seventy Seven ‘is out now on Up-Tone Records.