DO IT RIGHT NOW! 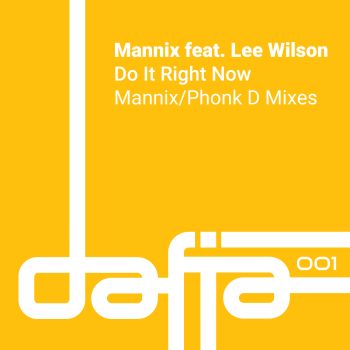 MANNIX is one of Austria’s top soulful house DJs/Producers. He’s been on the scene since the early 90s and has worked here, there and almost every flippin’ where! His work has been released on labels like AM: PM, Go Beat, Generate Music, Soundmen On Wax, Polydor and V2. Right now, our man has his own label – Dafia; and he’s launching it in fine style with a big, big outing called ‘Do It Right Now’.

Featuring US vocalist Lee Wilson, ‘Do It Right Now’ is a funky Disco house affair powered by full live instruments, – brass stabs, warm keys and funky guitar licks all enhancing Mr Wilson’s soulful delivery. The tune also comes in a remix from German Disco connoisseur Phonk D., who cranks up the funk with a mighty growler of a bass line and some bonkers bongos!

‘Do It Right Now’ will be released on Traxsource Promo on February 26th / Full release March 5th, 2021 on Dafia Records.