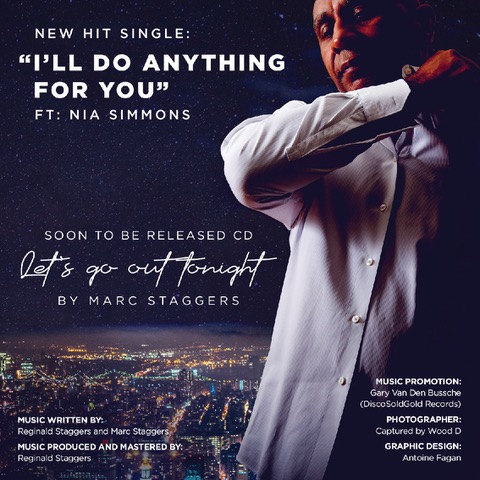 ‘I’ll Do Anything For You’ is the welcome return for the remarkable MARC STAGGERS – a soul man who over the last few years has built a large and steady following on the back of cuts like ‘Let Me Be The One’, ‘Bring It Home’ and his delicious cover of ‘This Old Heart Of Mine’ – that last one explaining why Mr S made such an impact and reputation as the premier Luther Vandross sound-alike. Then of course there were albums like ‘The And Now’ and ‘Cruising’ – both of which topped the credible soul charts.

We’re told that ‘I’ll Do Anything For You’ is the lead track from a new album…. ‘Let’s Go Out Tonight’ which is due very soon. In the meantime, the single is all set to duplicate the success of Marc’s previous 45s. ‘I’ll Do Anything for You’ (written by Marc and brother Reginald and a duet with Nia Simmons) is a classic modern soul groove with an 80s Weekender feel that proclaims its infectiousness from the first bars. As an extra bonus, the tune also comes in a pacey John Morales mix that retains the class of the original mix but then adds a set of beats that just takes it into sophisticated soulful house territory.