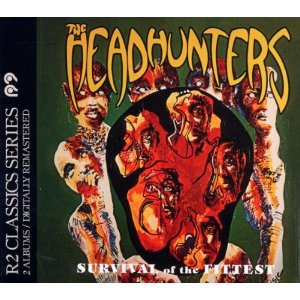 There’s a new reissue company in town – founded by funk and jazz fanatic, Kyri Patsalides, they’re called R2 and are based in the UK. The label’s debut release – and the inaugural offering in their ‘R2 Classics Series’ – is a ‘twofer’ devoted to THE HEADHUNTERS.

Though they began life as Herbie Hancock’s band on the keyboardist’s classic ‘Head Hunters’ album in 1973, in ’75 and ’77 they cut LPs under their own name. Out of print for many years, the group’s cult albums ‘Survival Of The Fittest‘ – which includes the classic ‘God Made Me Funky’ – and ‘Straight From The Gate‘ now return in a gatefold digipak 2-CD set. Release date is March.

Later, in April, R2 intends to reissue a couple of funky and sought-after ’70s albums on Arista by keyboard legend, LARRY YOUNG, and his band FUEL – ‘Larry Young’s Fuel‘ and ‘Spaceball.’

All of R2’s reissues are remastered from the original master tapes.