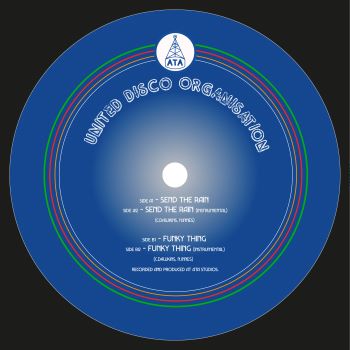 UNITED DISCO ORGANISATION is a new name to us but we do have experience of who’s involved. The UDO collective is essentially a collaboration between ATA Records co-founder and multi-instrumentalist Neil Innes and fellow multi-instrumentalist Chris Dawkins (Nightmares On Wax, Jimi Tenor, David Holmes). You may well remember, Innes for his forays into soul-jazz with The Lewis Express.

The duo  tell us that this project aims “to explore early disco, that period from 1974-1976 when soul and funk plus a touch of jazz were transforming into a new sound and beat that would very quickly conquer dancefloors across the world. And still does today.”

That exploration is about to deliver two tracks ‘Send The Rain’ and ‘Funky Thing’. The former marries a Hamilton Bohannon groove with wild blaxploitation themes, chants, disco handclapping and a crazy Herbie Mann inspired flute! The second tune’s title speaks for itself. Yep, it is funky but it’s topped by some delightful Roy Ayers style vibes! Both tunes are disco for sure – but disco before commercialization took hold; disco when there was always a soul and/or jazz undertow.

As befits proper disco music ‘Send The Rain’ and ‘Funky Thing’ will be released as a 12” single via Leeds-based ATA Records on 3rd December. For those who prefer old fashioned formats the tracks will also be available digitally and on streaming platforms.