DIONNE NEWIE ON THE WAY…. 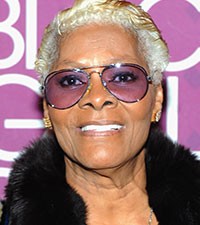 Soul legend DIONNE WARWICK has just announced that she’ll be releasing a brand new album in May. The set, tentatively titled ‘Feels So Good’, will be released via her son, Damon Elliott’s music group.

Were told that the ten tracker will be a duets album featuring collaborations with people like Alicia Keys, Ziggy Marley, Cee Lo Green and someone called Stevie Wonder. “Cutting edge” production comes from amongst others Jack Splash and Swizz Beatz. The songs, apparently, will consist of an “exciting mix” of new material and covers and you can learn more @ www.DionneWarwick.us

Here @SJF we’ll wait and see – after all, many soul stars have promised new albums and failed to deliver (remember Mr. Wonder’s proposed newie last year?). There are all kinds of reasons for this. One seems to be the US music majors’ reluctance to take on artists of a certain vintage… even though they may be major names with remarkable track records.

Case in point is GLADYS KNIGHT. At the back end of last year she put together an album but found no major backers. The set, ‘Another Journey’, was eventually marketed via CD Baby. In truth it was patchy – just 8 songs that had the feel of being cobbled together. But come on! It’s Gladys Knight and with production from Randy Jackson with added input from Leon Sylvers you’d have thought someone would have taken it on… but no. That’s soul 2014!