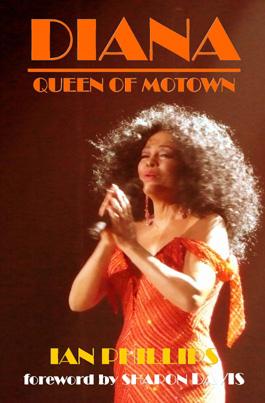 Of all the great soul divas no one polarizes opinion more than DIANA ROSS. To some she got to where she is because of who she knew not how she sang while to others she’s the soul goddess Supreme, blessed with huge charisma and a soulful depth to boot! Writer IAN PHILIPS clearly falls in to that second camp. He’s been a fan of Ms. R since he first heard ‘Stop In The Name Of Love’ back in the 1980s and he’s been smitten ever since. IAN is one of those besotted fans who travel to every ROSS gig when she’s in the UK… the ones who snaffle up all the centre, front row seats and sing along to all the hits and throw the bouquets at the end. ROSS-expert bar non, IAN has just realized a long standing ambition – to publish a book about his heroine… and it’s just hit the sales racks.

‘DIANA QUEEN OF MOTOWN’ (published by Bank House Books) is, as you can imagine from what I’ve said, a huge tribute to DIANA. Interestingly, it’s not a biography as such. Rather it’s an overview of her lengthy career achieved by examining her recording/film/ key performance output in chronological order. It’s a great concept but because of where the writer’s coming from there’s nothing here that’s objective. We lurch from one gushing appraisal to the next and the key events in the story (e.g. the sacking of FLORENCE BALLARD, ROSS’S relationship with BERRY GORDY etc ) are glossed over in a perfunctory way. So we learn nothing that’s new.

Sadly, too, the text is peppered with errors – (e.g. DAVID RUFFIN wasn’t the lead voice on the TEMPTATIONS’ ‘The Way You Do The Thing You Do’ and ‘The Impossible Dream’ wasn’t an ELVIS PRESLEY original, rather a show song from ‘Man Of La Mancha’) and IAN’S asides might raise a few eyebrows too – “In my opinion, Dennis (Edwards) was a more outstanding and gifted vocalist than David (Ruffin)”… well, more aggressive, louder… maybe, but better? Taken together, the errors and the opinions undermine some of the writer’s credibility. Equally there’s a whole “tribute” section at the end which seems a little pointless. The tributes come from people like LYNDA LAURENCE, SCHERRIE PAYNE, various members of the VANDELLAS and the MARVELETTES, LEEE JOHN (of IMAGINATION) and DAVID and CARRIE GRANT. Interestingly there’s nothing from MARY WILSON or indeed any of ROSS’S more immediate circle.

That said the book is well presented in a most attractive package – though, given that the text is largely based on an assessment of DIANA’S albums it might have been an idea to use album pack shots for illustration. Still, for Ms ROSS’S legions of fans the book will be treasured … if only to confirm what they already believe, and with Christmas around the corner I can see it filling many a stocking.

DIANA QUEEN OF MOTOWN by IAN PHILIPS is available now and is published by Bank House Books.