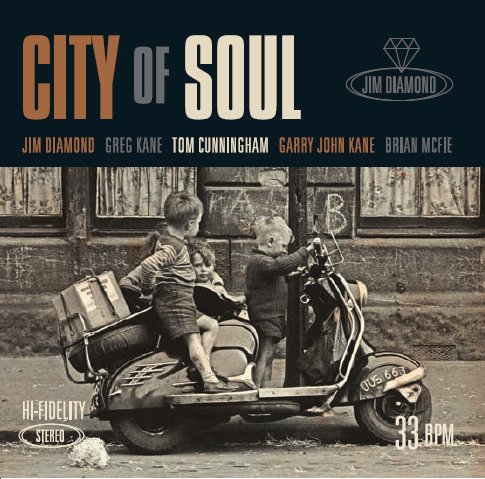 To music fans of a certain vintage the name JIM DIAMOND will mean a string of mid-80s hits of which ‘I Should Have Known Better’ has become a staple of the oldies stations. Glasgow born and bred, JIM has continued to make music and the music he makes is the music that inspired him in his youth… sweet soul music.

A few months back JIM teamed up with RADIO CLYDE and SIR TOM HUNTER to make an album to raise money for SIR TOM’S very special Cash For Kids Charity. The LP was recorded in just 14 days and features the cream of Scotland’s musicians. Amongst those on the LP are WET WET WET drummer TOMMY CUNNINGHAM, keyboardist from HUE AND CRY – GREG KANE and PROCLAIMERS’ bassist – GARY JOHN KANE.

The album – ‘City Of Soul’ –has just been released on Camino Records and it features a set of 12 soul standards that are near and dear to JIM and the band. Songs include ‘I’m Your Puppet’, ‘Spanish Harlem’, ‘Since I Lost My Baby’ and ‘Holy Cow’ and with a full horn section behind them they’re given a whole new vitality. More importantly, though, every penny raised from the sale of the album will go to SIR TOM HUNTER’S Cash For Kids Charity.

Go to our reviews section for an in-depth look at the album.