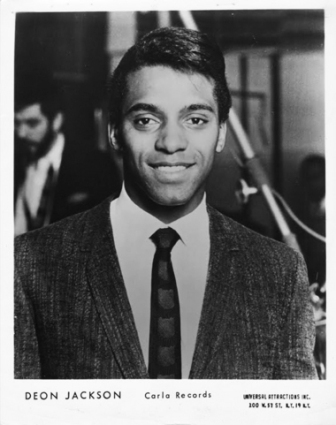 Jackson was born in Ann Arbor, Michigan on Jan. 26th 1946 and studied clarinet and drums as a child, and while at high school he formed his own vocal group, yet still worked the local talent show circuit as a solo singer. While still at school Deon was signed by local music biz entrepreneur Ollie McLaughlin and soon had a couple of local hits in the Detroit area – ‘You Said You Love Me’ and ‘Come Back Home’.

Then in ’65 he broke through nationally with the sublime ‘Love Makes The World Go Round’. Jackson wrote the ultra catchy song himself and it was released on McLaughlin’s Carla label, achieving No. 3 on the R&B singles and 11 on the pop chart. Jackson scored two more, smaller scale hits – ‘Love Takes A Long Time Growing’ and ‘Ooh Baby,’ while his ‘That’s What You Do To Me’ was popular on the Northern soul scene.

In the late 60s, Jackson went on to become a popular performer in clubs around the Chicago area. As the work dried up he became a teacher and counsellor in the Wheaton, Illinois school district and it’s said that Jackson never told his students about his singing career until some of them found an early performance of his on YouTube.

‘Love Makes The World Go Round’ remains Deon Jackson’s lasting testament. The song’s been covered many times – notably by Kiki Dee at Motown and by McLaughlin stable mate Barbara Lewis (even Percy Sledge had a stab at it). Jackson’s original though remains the definitive version – one of those very rare records where every ingredient is just right and a reminder as to why we got caught up in the magic world of soul music in the first place.