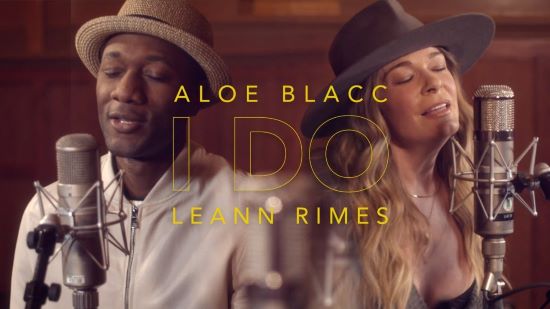 My how time flies! To celebrate Valentine’s Day 2020, ALOE BLACC issued a lovely single, ‘I Do’ – a reaffirmation of his love for his wife, the Australian musician Maya Jupiter. The single eventually became a key track on Aloe’s October album, ‘All Love Everything’. Now Mr. B’s people tell us that our man is gearing up to release a “deluxe” version of the long player on 12th March.

The new edition of the album will feature three new tracks – including a new version of ‘I Do’ which has been turned into a Blacc duet with LeAnn Rimes and that very track has just been released a single and hors d’oeuvre for the new collection.

The duo met on the US version of The Masked Singer and decided they should work together again (they had previously recorded a duet on Ms. R’s 2015 Christmas album). In truth the “new” version of ‘I Do’ isn’t a million miles away from the original… the addition of Rimes’ voice just adds a new perspective and interestingly the duet will also feature on LeAnn’s own upcoming album, ‘God’s Work’ – due May. In the meantime, enjoy again the tender ballad that is ‘I Do’ – available now from all good streaming/download platforms.