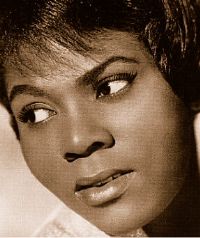 DEE DEE WARWICK – regarded by many as the soul singers’ soul singer – died on Saturday 18th October – she was 63. DEE DEE, younger sister of DIONNE, had been ill for a long while and she passed away at a nursing home in Essex County, New Jersey. DIONNE was with her. DEE DEE was born DELIA MAE WARRICK on 25th. September 1945 and she began singing with her sister in the 50s. Then, working alongside their aunt CISSY HOUSTON, the sisters became New York’s hottest session vocalists and it was only a matter of time before solo careers beckoned… after a surreptitious name change of course. History will recall that DIONNE WARWICK enjoyed more hits and more success, but to soul purists DEE DEE WARWICK was regarded as the superior soul stylist. Signed to Mercury/Blue Rock she enjoyed success with the original version of ‘I’m Gonna Make You Love Me’, while ‘When Love Slips Away’ has always been a popular tune with UK soul collectors. DEE DEE’s time with Atco Records yielded some sultry southern scorchers like ‘She Didn’t Know’ while in later years work – like ‘Fool Of The Year’ – on smaller indie labels has been much sought after. More recently – and before the onset of her illnesses – DEE DEE toured as one of sister DIONNE’S backing vocalists… and it’s her sister who has provided a short, but fitting tribute to DEE DEE’S talent: “All I can say is that God has another incredible voice to add to his angelic choir.”
DEE WARWICK 1945 – 2008