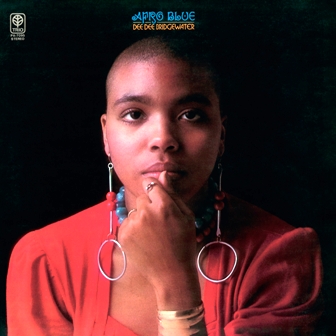 Memphis born DEE DEE BRIDGEWATER is now a mainstay on the jazz circuit and her many fans will be delighted to learn that Mr Bongo Records are about to reissue her debut album, ‘Afro Blue’.

The 7 track long player was recorded in Tokyo in 1974 and the album was first released exclusively in Japan via two different Japanese labels (Trio Records in 1974 and All Art in 1985 respectively). The album featured a collaboration of American and Japanese musicians, such as Cecil & Ron Bridgewater (trumpeter Cecil was married to Dee Dee), Motohiko Hino and producer Takao Ishizuka. The album is now acknowledged as a soul-jazz classic and features remarkable covers of ‘People Make The World Go Round’ and ‘Raindrops Keep Falling On My Head’ alongside a shifting cover of the Mongo Santamaria/Oscar Brown title song.

The record has long been a sought-after item for DJs and collectors alike and Mr Bongo are offering it in its original 1974 Trio format. It will be released in vinyl and on CD on June 19th.