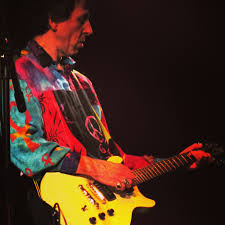 JON TIVEN may not be a well-known name in the musical mainstream but  soul and blues connoisseurs sure know all about his sterling work. Tiven, you see, who was born in Connecticut in 1955, has worked with a whole host of luminaries including Wilson Picket, Don Covay, Howard Tate, Garnett Mimms, Ann Peebles and many, many more.

His musical odyssey began when he started to learn the sax as a teenager. A baseball accident and 21 stitches soon put paid to that and Jon took up guitar. His teacher was Ed Cherry and he also picked up tips en route from Duane Allman while Teenie Hodges was another big influence. In the late 60s Jon branched out into music journalism before landing a job with the Chess Records office in New York. Jon’s next move was down to Memphis where (now an acclaimed guitarist) he produced an album on ex Big Star man, Alex Chilton. From there he worked in a band called The Yankees which soon morphed into the Jon TIven Group. More production and session work followed and he even worked with John Belushi – teaching him guitar, and hooking up with Belushi’s former partner, Dan Ackroyd on the ‘One More Saturday Night’ movie. Jon was also constantly writing songs most notably with Don Covay. His songs have been recorded by people like Huey Lewis, BB King, Syl Johnson, Freddie Scott and Arthur Alexander and most of the artists Jon has written for welcomed his skilful production input too.

In 1998 Jon produced and co-wrote Wilson Pickett’s first album in seventeen years, ‘It’s Harder Now’, which won three prestigious W.C. Handy Awards and in addition was nominated for a Grammy. Tiven continued to have his songs recorded by other artists- amongst them Robert Cray, Johnny Winter and Buddy Guy.

Moving from New York to Nashville in 2002, John produced a series of well-received albums by Frank Black, previously best known as lead singer and songwriter with the Pixies. In 2004 he produced and co wrote what would become Little Milton’s last recorded effort ‘Think Of Me’. In 2007 Jon produced and wrote ‘ Is Anybody Out There?’ , a new spiritual album by Garnet Mimms. He also produced and wrote ‘Intuition’, the first recordings in thirty-seven years by Betty Harris.

Jon Tiven’s latest project is an album on Detroit soul man , Willie Jones. Jones was a member of 50s doo-wop group, The Royal Jokers who secured a deal with Atlantic in 1955. When the group folded, Willie continued to work the local circuit as a solo artist. Now over half a century later he’s hooked up with Jon Tiven for his first ever album ‘Fire In My Soul’ (go to our reviews archive for a full review).

In a completely different vein, ‘Ten Lights Years Away’ and ‘Light Of Day’ are two songs Tiven wrote with Chuck Mead for his album ‘Free State Serenade’, which currently holds the #3 position on the Americana charts. Moreover Jon’s  song ‘Just Enough’ (written with wife Sally and Frederick Knight) is a key cut on J J Thames’ ‘Tell You What I Know’ album currently nestling at #5 on the Billboard Blues Chart.  Jon also continues to play live – gigging and recording in his own right and as a guest (he’s even returned to the saxophone) and he comments, “To those of you who have enjoyed my work, I’m going to keep on doing it as long as there’s an audience. To those who haven’t, I’m not going anywhere so I hope you find something you like in something I’ve done” .

Find out more about this music maven @ www.jontiven.com